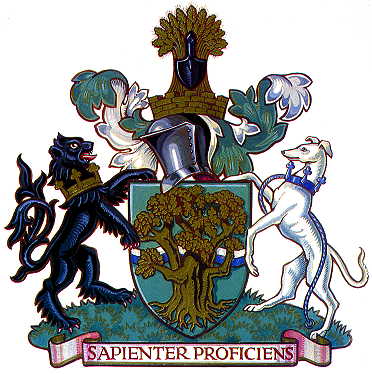 Arms : Vert a Fesse wavy per fesse wavy Argent and Azure over all an Oak Tree fructed Or.
Crest : Issuant from a Mural Crown a Garb Or charged with the Blade of a Miner's Shovel Sable.
Supporters : On the dexter side a Lion rampant queue fourchee Sable gorged with a Saxon Crown Or and on the sinister side a Greyhound Argent gorged with a like Crown with line reflexed over the back Azure.
Motto: 'SAPIENTER PROFICIENS' - Progress with wisdom

The shield shows the natural features of the county. The wave is for River Trent and the oak tree for Sherwood Forest. The crest has a golden mural crown, symbolising local government. A garb rises from the crown, which is itself charged with a black shovel blade. These two charges represent agriculture and coal mining, the two traditional sources of employment in the county.

The dexter supporter is a black lion queue-fourcheé from the arms of the Dukes of Portland. The sinister supporter is a silver greyhound from the Duke of Northumberland's arms. Members of these two families have provided Lords Lieutenant of the county. Both supporters are gorged with Saxon crowns, recalling the Saxon creation of Nottinghamshire in AD 918.