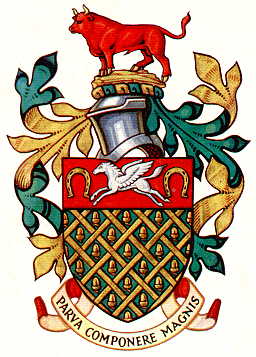 Arms : Vert semé of Acorns and fretty Or on a Chief Gules a Pegasus courant Argent between two Horseshoes Gold.
Crest : On a Wreath of the Colours upon a Rock Or a Bull Statant Gules armed and unguled Gold.
Motto: 'PARVA COMPONERE MAGNIS'-Small but comparable with great

The arms were officially granted on November 6, 1958.

The green of the shield and the acorns are indicative of the rich pastures and woodlands and also commemorate the Royal Forest of Leighfield which centuries ago covered part of this area. It has been said that the name of Oakham owes its derivation to the magnificent oak trees which used to grow in this forest. The horseshoes refers to the ancient custom that, all Peers of the Realm passing through the County are required to present a horseshoe to the Lord of the Manor of Oakham, it is also usual for members of the Royal Family to present a horseshoe. Among this unique collection which can be seen in the Castle at Oakham are horseshoes presented by Her Majesty The Queen, by H.R.H. Prince Philip and H.R.H. The Duke of Gloucester. The other emblems recall three great families associated with the district.

The "fretty" comes from the arms of both the Noel and Ancaster families. The Rt. Hon. The Earl of Gainsborough, J.P., was a member of the Noel family and Chairman of the Council for 15 years and at the time of the grant held the office of President of the Rural District Councils' Association. Lt. Col. R. E. M. Heathcote, D.S.O., M.C., who retired after 30 years service on the Council was a member of the Ancaster family. The Pegasus is taken from the arms of the Finch family of Burley-on-the-Hill, but it also signifies the District's close link with the Cottesmore Hunt, whose Kennels are within its area. A further connection is with No. 35 Squadron RAF whose crest is the head of Pegagus and was one of the first squadrons to be stationed at the RAF Station, Cottesmore. Mr. Henry R. Finch was Chairman of the Council from 1895 to 1920, and a descendant, Lt. Col.J. R. Hanbury, Lord of the Manor of Oakham, served as a member of the Council.

The rock represents ironstone quarrying and industry in general, whilst the bull signifies agriculture, stock rearing, being of particular importance in the area.

The motto is indeed true of the spirit of the County and was so amply exemplified in the gallant and successful fight against the Local Government Commission's proposal to abolish the County of Rutland.