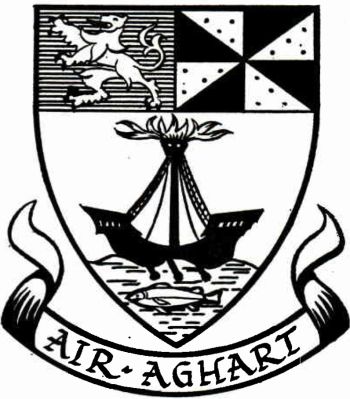 Argent, in the waves of the sea Proper a lymphad Sable, oars in action, with a beacon on the top of the mast Proper, in base a salmon naiant Argent; on a chief parted per pale, dexter, Azure, a lion rampant Argent; sinister, gyronny of eight Or and Sable.

And in Escrol below the Shield this Motto "Air Aghart".

Oban was created a Burgh of Barony in favour of George William, 6th Duke of Argyll, in 1811.

The arms show the black galley of Lorn, flaming beacon at the masthead, to recall the Lordship of Lorn which has been held by the Earls and Dukes of Argyll since the fifteenth century, when Colin, 1st Earl of Argyll, married Isabel Stewart, the Lorn heiress; the galley and the salmon below denote that Oban is an important fishing centre and seaport.

In the chief are the silver lion on a blue field of the MacDougalls, ancient Lords of Lorn, along with the gold and black gyronny of the Camp­bell Earls and Dukes of Argyll.

The arms are now used by the Community Council