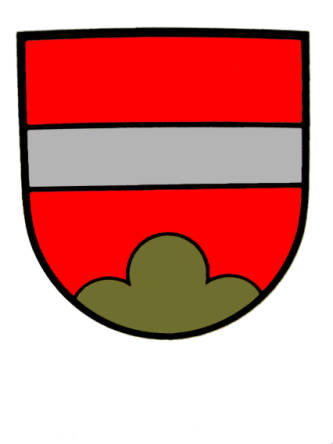 The arms were officially granted by the State Archives of Baden in 1902, but only adopted by the municipality in 1920.

The arms show the silver bar in red for Austria, as the village was part of the Austrian area in Baden until 1806. The golden hills (Berge) are a canting symbol.

The oldest use of arms by the village is known since 1665. On a border stone from that year the Austrian arms appear as village arms. In a later stone from 1690 the hills already appear in the base. A third one, from the mid 1700s does not show any arms, but only the three hills. The last known borderstone dates from 1773 and shows the arms with the bar and hills, but also with an additional banner. This banner (Fahne) refers to the Lords of Fahnenberg, who ruled the village at the time.

The oldest seal of the village dates from the early 18th century and is known since 1749. It also shows the arms with the bar and hills. A second, 19th century, seal shows the same composition.

The arms have thus been in use since the late 17th century, but the colours were not known, as no colour images exist. The State Archives thus proposed in 1902 the Austrian colours and golden hills.