From Heraldry of the World
Your site history : Oberhausen (Rheinhausen)
Jump to navigation Jump to search 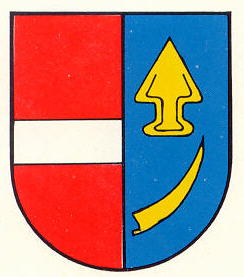 The arms were officially adopted in March 1907, but have been used since the 17th century.

The oldest known seal of Oberhausen dates from 1700 and already shows the above arms. Later seals all show the same composition, only in one late 19th century seal, there is an added wing in the upper right half abover the bar.

The arms show the arms of Austria, as the are belonged to Austria until 1803. The plough iron and scythe are symbols for the agricultural character of the village. The colours were determined in 1907.