From Heraldry of the World
Your site history : Oberjosbach
Jump to navigation Jump to search 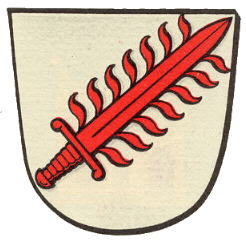 The arms show a flaming sword, symbol of the local patron saint, St. Michael. The saint appeared already on the oldest seal of the village, dating from 1719. The colours of the arms are derived of the colours of the former rulers in the area; the counts of Eppstein and the Archbishops of Mainz. Both used only silver and red as colours.

After the village became part of Nassau in 1803 the seals showed only a landscape in the 19th century, and a church in the early 20th century.