From Heraldry of the World
Your site history : Oberthal
Jump to navigation Jump to search 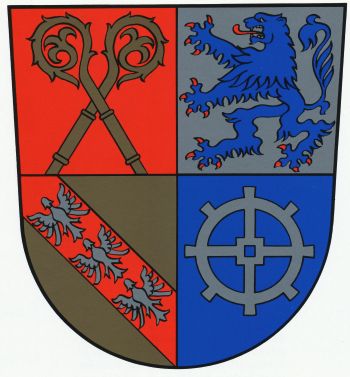 The first quarter represents Gronig. As this village was a longtime possession of the Tholey abbey, the village is represented by two crossed crosiers.

The second quarter shows the lion of the Counts of Veldenz, and is taken from the old arms of Steinberg-Deckenhardt.

The third quarter represents Oberthal. The village historically belonged 500 years to Lorraine (Lotharingen), hence the use of the arms of Lorraine.

The fourth quarter represents Güdesweiler, the mill wheel is taken from the old arms of this municipality.