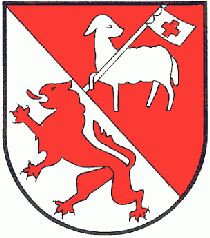 The arms were officially granted on December 9, 1975.

The arms show in the upper half an Agnus Dei, the symbol of the Diocese of Brixen, and in the lower the lion of the Counts of Görz. The oldest document in which Tilliach is mentioned dates from the 12th century and the area at the time was ruled by the Bishop of Brixen and the Counts of Görz.