From Heraldry of the World
Your site history : Obertshausen
Jump to navigation Jump to search 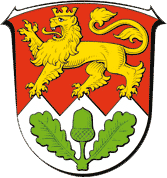 The arms show in the upper half the arms of the Counts of Schönborn, with in the base an oak leaf for the old municipality of Hausen.

The previous arms were granted in 1952 and show in the lower part the local castle, built by the Bishops of Mainz in the 12th century. The colours of the arms are also taken from the silver and red of the State of Mainz. In 1664 the Bishops sold the town to the Counts of Schönborn, who used arms with the points of Franconia (their territory of origin), with a lion on top of the points. 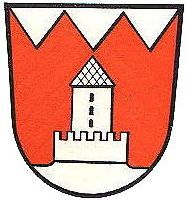