From Heraldry of the World
Your site history : Oberursel
Jump to navigation Jump to search 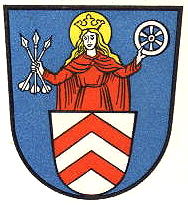 Oberursel was a possession of the Lords of Eppstein, who granted city rights in 1444. In 1581 the city became part of the State of Mainz. The arms are based on the oldest known seal of the city, which date from the early 15th century. The arms show St. Ursula, the patron saint, with in front the arms of the Lords of Eppstein. In 1646 the wheel of Mainz appears in the left hand of St. Ursula. The last changes were made in 1906 when the number of chevrons was reduced to two instead of three for Eppstein.

Hupp showed the arms a little different, with different colours and no wheel, but a palm leaf instead.