From Heraldry of the World
Your site history : Oberrad > Oberwesel > Category:German Municipalities H > Obermenzing > Offenbach am Main
Jump to navigation Jump to search 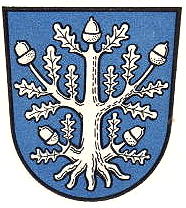 The oak tree in the arms is derived from the historical Dreieich (three-oaks) district. The oak appears already in the oldest seal of the city, known since 1639. In the 19th century the oak was placed in a shield and the colours were defined. Still sometimes the arms were shown in more natural colours, see below.