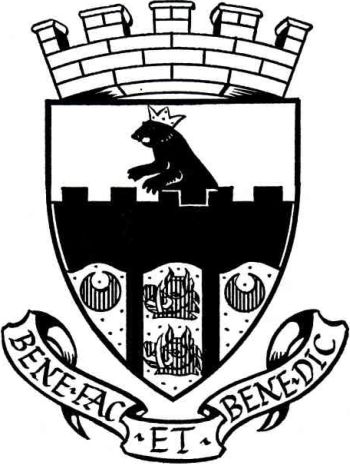 Per fess Argent and Or, a demi-otter in chief Sable, crowned of the Second, issuant from a fess of the Third embattled in chief wavy in base, and in base two boars' heads erased Gules, armed Proper and langued Azure, in pale between two pallets of the Third accompanied by as many crescents in the flanks of the Fourth.

Below the Shield, which is ensigned with the coronet proper to a Burgh, is placed in an Escrol this Motto "Bene Face et Bene Dic".

Old Meldrum was created a Burgh of Barony in 1671 in favour of Adam Urquhart, 2nd of Meldrum.

The arms refer to the three notable families, Meldrum, Seton and Urquhart, who have successively been lairds of the lands of Meldrum. At the top of the shield there is the crowned black otter of Meldrum on its silver field; it issues from an embattled fess to represent the Burgh.

Below, on the golden field used by both families, are two red crescents for Seton and two red boars' heads for Urquhart; they are accompanied by two black pallets taken from an ancient seal of Philip de Fedans, an ancestor of Meldrum of Meldrum.

The Latin motto "Do well and speak well" was inspired by the "Mean, speak and do well" used by the Urquharts of Meldrum.