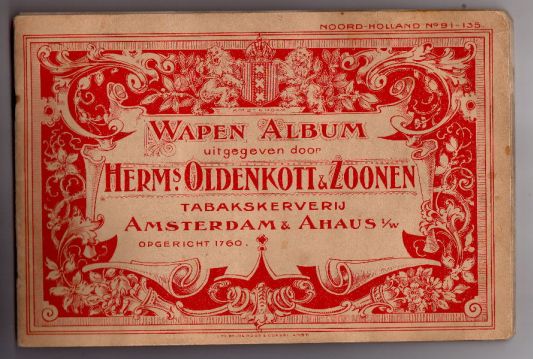 Very little is known about the company. According to the albums the company was founded in 1760 in Amsterdam as Hermann Oldenkott, with since 1819 a subsidiary in Ahaus (Germany). Probably the factory had some other factories as well, as in 1838 August Kersten from Rees (Germany) bought the factories from Heinric Oldenkott in Elten (Germany) and Weesp (Holland). It is, however, not clear whether these were part of the same company as the original Oldenkott company. This German company increased rapidly and became one of the largest German tobacco companies. In 1929 the factories from Hermann Oldenkott in Ahaus and Neuss (Germany) were bought by the German Oldenkott company. The German company also produced pipes since 1932. In 1972 the German company was bought by the Dutch company Niemeijer. Tobacco production ceased in 1974 and only pipes were still made. In 1987 the German pipe company was bought by the Kersten family again, but closed in 1992.

The original Dutch company finally was bought by the Sopla company from Amersfoort in 1923. The company also moved to Amersfoort. For some time the Oldenkott brands still existed, but the Sopla brands took over.

The Oldenkott tobacco company in Amsterdam started approx. in 1905 to issue small 5x3 cm thick cards with the arms of major Dutch towns. The cards could be collected in a small album. It is not sure when the album was issued, but in 1907 people were exchanging the cards (advertising in newspapers).

As the action was a success, more series were issued, and finally 10 albums and nearly 900 arms were issued. Not only town arms, but all registered arms at the time, which included arms of provinces, estates (heerlijkheden), water boards (waterschappen), religious arms and the arms of Utrecht University.

The albums were not made with great geographical care. Many names of towns and provinces are spelled wrongly. The IJssel river(s) are spelled in different albums as : Yssel, IJsel, IJssel and in the provincial name on the cover of Album 9 as Overijzel...

Later the company also issued albums with international arms. Of these I only know about the Swiss album, but others may have been issued as well. Besides these, both the Dutch and the German companies issued albums on other topics.

There are several variations of the Dutch cards, not in picture, but in the text on the back of the cards. As usual with tobacco and advertising cards, some advertising was printed on the back of the cards. For the Oldenkott cards, especially numbers 1-90 from the first series, 5 different versions exist; two Dutch versions in blue (difference is the price of the cigarettes 'á 60' or 'á 70'), one in black and one version in French (?!). The last series (Slotalbum) was issued with a different advertising text, see images below. 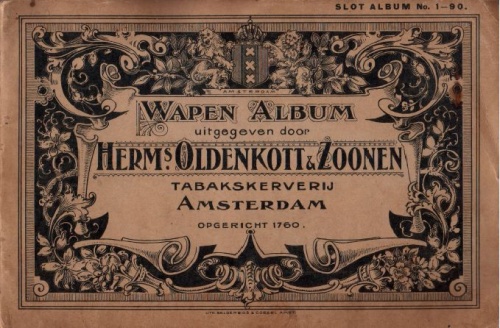