From Heraldry of the World
Your site history : Oldham
Jump to navigation Jump to search 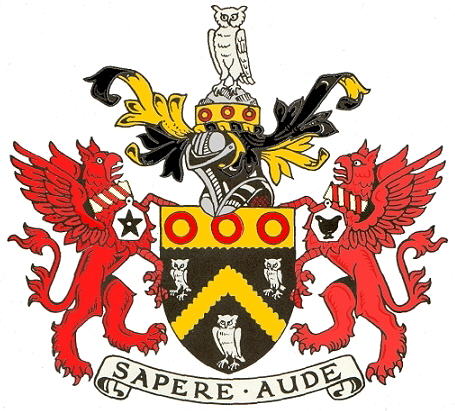 Arms : Sable a Chevron invected Or between three Owls Argent on a Chief engrailed Or as many Annulets Gules.
Crest : On a Wreath of the Colours issuant from a Circlet Or charged with six Annulets Gules a Rock proper thereon an Owl Argent.
Supporters : On either side a Griffin Gules each gorged with a Collar engrailed Argent charged with six Bendlets Gules pendant therefrom a Heptagon Argent that on the dexter charged with a pierced Mullet that on the sinister with a Saddle both Sable.
Motto: 'SAPERE AUDE' - Dare to be wise

The shield is derived from the former arms of the former Oldham County Borough Council, which in turn originated in the arms of the Oldham family (see f.e. Hugh Oldham). The showed three white owls (a pun on "Owldham") divided by a plain gold chevron and three red roses on a plain gold "chief" across the top of the shield. In the arms, the chevron and chief have fluted edges like those in the former Oldham arms. This decorative edge may have been suggested by that of the diagonal stripes or "bendlets" in the arms of the Radcliffes, who held Oldham at one period. The three roses in the old arms are replaced by three red rings giving the initial letter O.

The crest is again derived from the former Oldham crest. The owl is shown on its rock rising from a gold circlet charged with the three red rings from the Shield. The supporters are two red griffins, which, with their adjuncts, identify the other districts in the most conveniently recognisable way, by the heraldry of their chief manorial families, which, in this case, are some of the most famous, not only in Lancashire, but further afield, in history. The griffin is the device of the Chaddertons (connected with Chadderton, Failsworth, Crompton and Lees) and of the Chethams (Crompton), both these families being branches of the de Traffords, whose red griffin is also seen at Eccles and elsewhere.

As a necessary difference they wear collars with engrailed or fluted edges like those of the black "bend" (diagonal band) in the arms of the Radcliffes (Oldham, Royton and Chadderton).

On the collars are the three red "bendlets" (diagonal stripes) on white, of the arms of the Byrons (Faiisworth, Crompton and Royton). From each collar hangs a white heptagon symbolic of the united seven authorities. On the left hand one is the black "mullet" or spur-rowel of the Asshetons (Oldham and Chadderton); on the other Saddleworth is represented by a black saddle in reference to the name and its derivation ("a settlement on a saddle-shaped ridge").

The former Oldham motto is retained. Like the owl it contains a play on the name, the second word "AUDE" containing the syllable "Owd" of the local pronunciation of "Owdham" or "Owldham". It means "Dare to be wise". 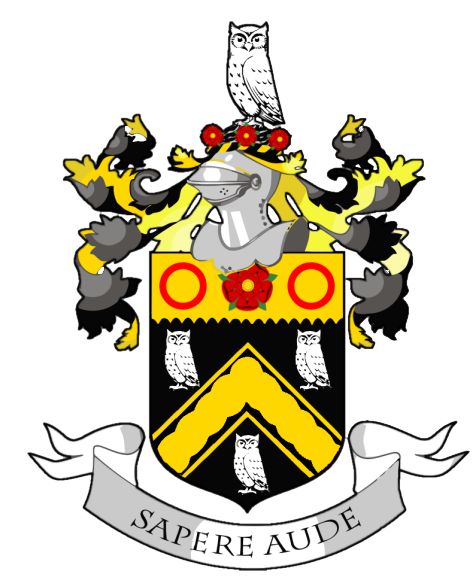 Arms : Sable a Chevron invected plain cottised Or between three Owls Argent on a Chief engrailed of the second a Rose Gules barbed and seeded proper between two Annulets also Gules.
Crest : On a Wreath of the Colours in front of a Rock thereon an Owl Argent three Roses fessewise Gules barbed and seeded proper.
Motto: 'SAPERE AUDE' - Dare to be wise

The arms were officially granted on November 7, 1894.

The meaning of the different elements in the arms is described above.