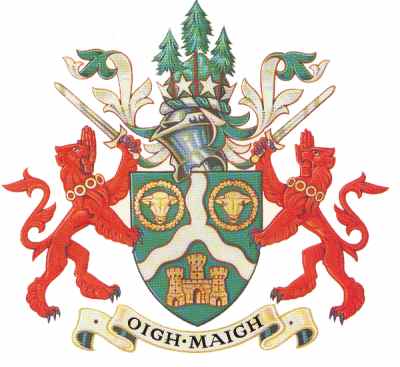 The shield indicates the topography and constitution of the District, the crest its scenic and touristic importance, the supporters its historic association with the O'Neills and the motto its ancient name

The shield has a background of green in which a reversed 'pall' or Y-shaped figure in white, represents the confluence of the Drumragh and Carnowen Rivers to form the Strule. The rural areas around Omagh are suggested by two gold bulls' heads, each enclosed within a garland of ears of wheat resembling the letter 'O', to represent mixed farming. Each garland has ten ears, so the total of twenty corresponds to the number of wards constituting the new District. The shield is completed by a stylised gold three-towered castle, the stronghold of the O'Neills, which also indicates the history of Omagh as a fortress and garrison town since the mid-fifteenth century.

Above the shield is the closed helmet proper to Civic Heraldry, with its crest-wreath and decorative mantling or tournament cloak in the basic colours of the shield, green and while. Upon the helm is the crest. In front of a hill representing the hills, especially the Sperrin Mountains, stand three pine trees alluding to one of the District's main amenities, the Gortin Glen Forest Park. These are enclosed within a circlet of white stars from the American flag alluding to the Ulster-American Folk Park in the District, which commemorates the Mellon family and the close links between the Irish and American peoples.

The supporters combine the red lion, sword and severed hand which are prominent in the heraldry of the O'Neills of Tyrone. The lions have a distinctive collar of gold 'Os' for Omagh and O'Neill.

The motto is the ancient Irish form of Omagh - Oigh Maigh.