From Heraldry of the World
Your site history : Oostende
Jump to navigation Jump to search 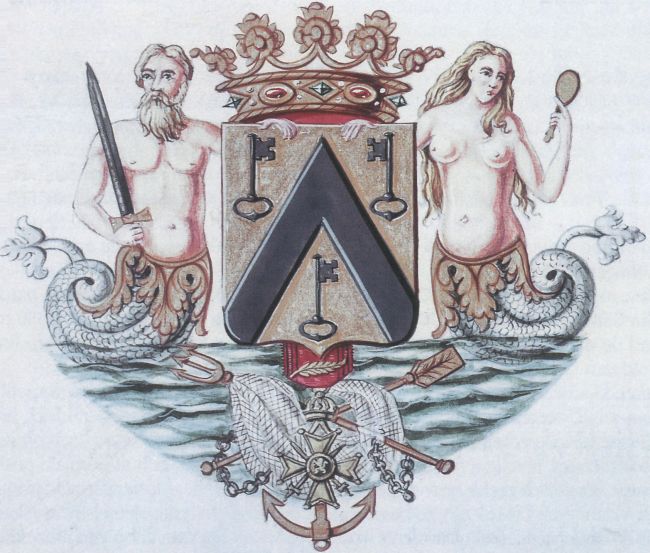 According to legend Oostende received as arms a key in 1267 from Margareth of Byzantium, who was married to the Count of Vlaanderen and who grante dthe city raights at the time. St. Peter was the patron saint of the new city. The city used on its oldest seals, known between 1309-1523, the image of St. Peter holding two crossed keys and small church. The contra-seals showed only his arm, holding two keys. As arms sometimes three keys were used, probably a symbol for St. Peter and the three city gates at the time.

The first use of the present arms dates from a picture in a late 16th century roll of arms. On an armorial map of Flanders from 1616 the arms are shown as well. The position of the keys (facing left or right) changes slightly in these years.

The present arms (with all keys facing right) appear on the contra-seals of the city from 1682 and other seals onwards.

The chevron in the arms is derived from the arms of the early medieval knight Wouterman van Gent, sherrif/governor of the Woutermansambacht area of the Brugse Vrije region (to which the parish of Oostende originally belonged). His arms were still used by the Woutermansambacht in the 16th century. Why in the late 16th century the keys suddenly were combined with the arms of the region to which the city belonged 400 years earlier, is no longer known.

The crown was only added in 1819, which was common for towns and cities represented in the provincial government at the time. The merman and mermaid were added in 1838. A mermen was used historically only once on a seal of 1517. There are no images of this seal available, only a description. It is thus not known whether the seal has actually been used and whether the merman was seen as a common supporter. In 1838 the mermaid was added for symmetry and has no histirical significance. The merman and mermaid indicate the importance of the city as a harbour and fishing town.

In 1951 the city receives the War Cross 1940-1945, which was added to the arms in 1956, together with more attributes relating to sailing and fishing.

The arms remained unchanged after the additions in 1971, but in 1995 the Flemish Heraldic Council proposed to the city a change of the crown to a mural crown to indicate the city status. The city, however, wanted to keep the now historical crown from 1819.