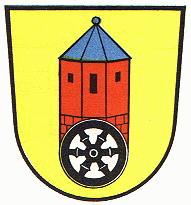 The arms show the Bennotower in Iburg. The tower was built in 1068 by Bishop Benno II of Osnabrück as one of his residences. The tower also was part of a Benedictine monastery and was of major strategic importance until 1673. In 1673 the bishops moved to their new palace in Osnabrück city and the tower lost its importance. The monastery was abandoned in 1803. The wheel is the wheel of the city of Osnabrück.