From Heraldry of the World
Your site history : Ostalbkreis
Jump to navigation Jump to search 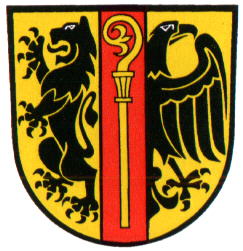 The arms are a combination of the eagle taken from the arms of the former district of Aalen, the lion of Schwäbisch Gmünd and the crosier for the Abbey of Ellwangen. The district was made up from the two older districts and the staff was added as the Abbey had many possessions scattered over the present district.