From Heraldry of the World
Your site history : Osterode am Harz
Jump to navigation Jump to search 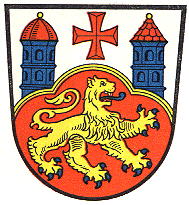 Osterode became a city in 1238 by the Welfen family. The first seal, dating from the middle of the 13th century shows the lion of the Welfen family below a walled city. In 1234 it was mentioned that Osterode had city walls. The cross is probably the sign of St. John Baptist, the patron saint of the city.

The arms never really changed through the centuries, except that until the 19th century a crowned O often was placed below the lion.