From Heraldry of the World
Your site history : Ottersberg
Jump to navigation Jump to search 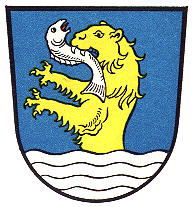 Ottersberg was already mentioned in 1200, and received town rights in 1677. The oldest seal of the town dates from 1719 and shows already a canting otter holding a fish.