From Heraldry of the World
Your site history : Pölfing-Brunn
Jump to navigation Jump to search 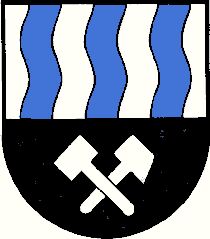 When the arms was granted, coal was still mined within the municipality; in honour of that fact, the Bergwerkszeichen were proudly put into the arms. The Bergwerkszeichen (miners' tools), consisting of Schlägel (mallet) and Eisen (a sort of chisel), takes pride of place in many Austrian coats of arms. The symbol may well date back to the Middle Ages and was even (sometimes) said to protect the Bergknappen (miners) against evil ghosts.

The upper part of the arms illustrates the "Brunn" (a spring).