From Heraldry of the World
Your site history : Palmerston North
Jump to navigation Jump to search 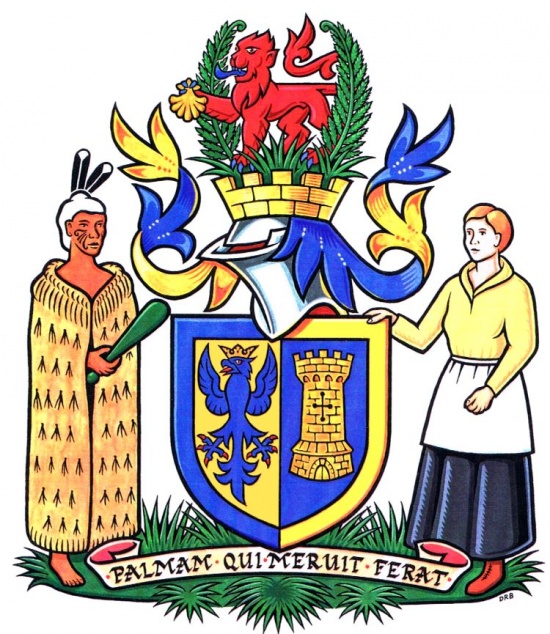 The grant replaces the unofficial Armorial Bearings which were in use by the city since 1885, but many emblems of the unofficial design have been incorporated into the new Arms.

The left hand side of the shield depicts a blue eagle on a gold background. This design is adapted from the unofficial armorial bearings and is derived from the Coat of Arms of the Temple family. Lord Palmerston (after whom the city is named) was a member of this family. The right hand side of the shield depicts a gold tower on a blue background. This design is also adapted from the unofficial arms, but the origin of the tower is unknown.

The crest on top of the shield includes a red lion, holding an escallop (shell) in its left paw. The shell is the badge of a pilgrim or palmer and provides an interesting pun on the name of the city. The greenery which surrounds the lion represents two palm leaves, providing additional links with the motto and the name of the city.

The supporters which stand on either side of the shield symbolise the multi-cultural nature of the city's population. The Maori chief represents the tangata whenua (the original inhabitants) of the city, while the European woman represents the tauiwi (the immigrants of more recent times).

The motto underneath the shield - PALMAM QUI MERUIT FERAT - is the same motto used with the unofficial arms and is derived from the motto of Lord Nelson. It may be translated as let him who has earned it bear the palm, a pun on the name of the city. It is also used by the city of Nelson.