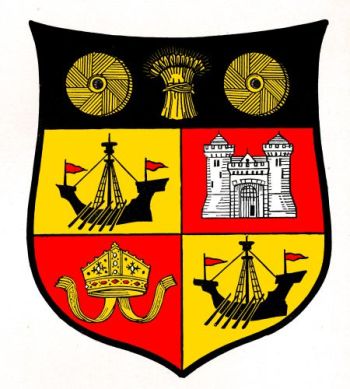 Quarterly. First and fourth, or, a lymphad or galley with oars in action sable, flags flying gules; second, gules, a double towered castle argent; third, gules , a bishop's precious mitre proper; on a chief sable a garb between two millstones or.

Partick adopted the General Police Act of 1850 in 1852, and came under the provisions of the Lindsay Act in 1866. Under the Burgh Police Act of 1892 a Common Seal was designed, shown below, featuring the shield above.

The lymphad is a conventional indication of the shipbuilding industry; the steamer symbolises the importance of the Burgh for boiler works in the town at the end of the 19th century.

The castle recalls the fact that the Bishops of Glasgow here possessed a manor-house from a very early period, upon the site of which manor-house it probably was that the so-called castle, the ruins of which remained standing until about 1836 was erected in 1611.

The mitre is in memory of the proprietorship of Partick by the See of Glasgow, to which it was granted by David I in 1136.

The garb and millstones, confined, in the chief sable, to the darkness of the past, are a memorial of the purely rural industries of Partick in the 19th century when it was an agricultural district possessing several mills belonging to its ecclesiastical superior.

In 1903 it was proposed to simplify the arms as follows :
Gules, between a garb on the dexter, a mill-stone on the sinister, and a galley in base, or, a castle double-towered argent, ensigned of a precious mitre proper.

This proposal was not accepted by the council.