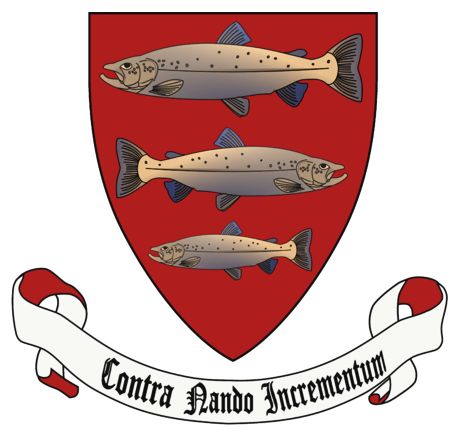 Gules, three salmon counternaiant in pale Proper. And in an Escrol this Motto "Contranando lucre­ mentum".

Peebles was created a Royal Burgh around 1153. The arms already appear on a seal of which an impression is known from 1479. The three salmon also appear on the Town Cross, which is thought to date from 1320.

The salmon recall the many salmon in the river Tweed, on which the Burgh stands; their arrangement on the shield refers to the habit of the fish travelling upstream from the sea to spawn and implies that for every salmon swimming up river, two return to the sea. The red colour has been used for centuries, but the meaning is not known.

The Latin motto means "Increase by swimming against (the stream)".

The arms are now used by the Royal Burgh of Peebles and District community council.