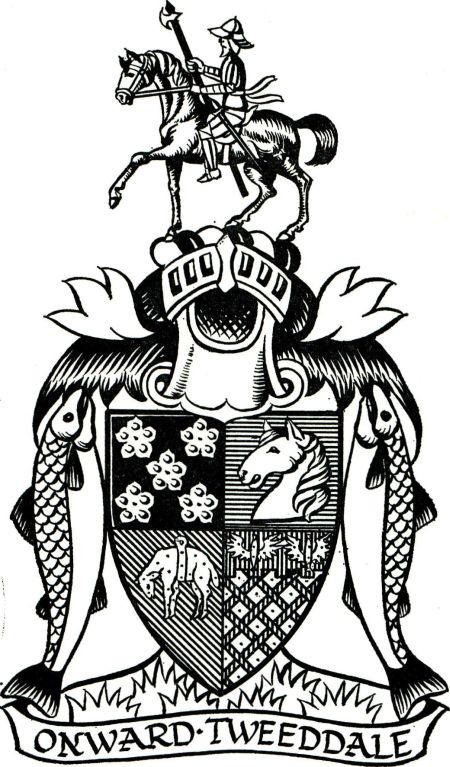 Above the Shield is placed a Helmet befitting their degree with a Mantling Sable doubled Argent, and on a Wreath of their Liveries is set for Crest on a horse passant, a border horseman fully armed all Proper, and on a Compartment below the same with this Motto "Onward Tweeddale", are set for Supporters two salmon Proper.

The 1st quarter has five silver fraises (or cinquefoils) on a black field from the arms of Fraser of Oliver Castle, one of the most ancient and famous families of Tweeddale, the old name for Peebles-shire; from this family, whose arms are said to have been "Sable, six cinquefoils Argent, 3, 2 and 1", are descended by marriage the Hays of Yester, Marquesses of Tweeddale, who also bear fraises (on a blue field) in their arms.

The 2nd quarter shows the arms of Horsbrugh, a family whose connection with Tweeddale is almost as old as that of the Frasers.

The 3rd quarter shows a golden fleece on a green field to represent the County's staple industries: agriculture, sheep­ farming and woollen manufacturing.

In the 4th quarter are the arms of Mr. M. G. (later Sir Michael) Thorburn of Glenormiston, who was both Lord Lieutenant and Convener of the County in 1931, and had rendered many years of distinguished service to the County.

The salmon supporters symbolise the river Tweed and the Royal Burgh of Peebles; the crest is a sixteenth-century Border knight and the motto looks forward to the future with confidence.