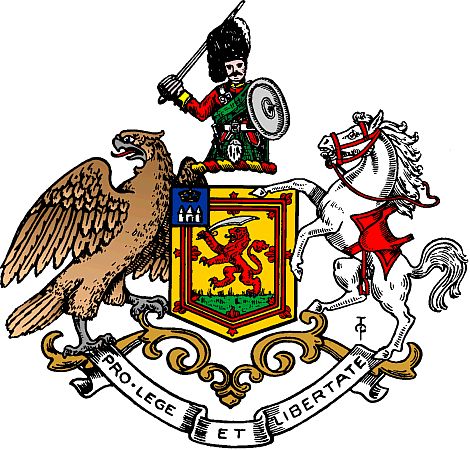 Or, a lion rampant Gules, armed and langued Azure, standing on a Compartment or mount Proper, and brandishing in his dexter forepaw a scimitar of the Last, all within a double tressure flowered and coun­ terflowered of the Second; on a dexter chief canton of the Third a front view of the Palace of Scone, Argent, ensigned on the top with an imperial crown Proper.

Above the Shield on a Wreath of the Liveries is set for Crest a demi Highlander affrontee, bonnet, belted, plaid, dirk, and pistols, brandishing in his right hand a broadsword aloft in a threatening posture, a target on his left arm, all Proper, and on a Compartment below the Shield on which are these words "Pro Lege et Libertate" are placed for Supporters, on the dexter, an eagle reguardant, with wings addorsed Proper, and on the sinister, a war horse Argent, furnished Gules.

The arms show the Scottish lion, as Perthshire historically was strongly linked with the Scottish Royal families. The lion holds a scimitar to defend the country. The free canton shows the Scone Palace and a crown, which symbolises the time when Perth was capital of cotland and many Kings of Scotland were crowned in Scone Palace.