From Heraldry of the World
Your site history : Peterborough (England)
Jump to navigation Jump to search 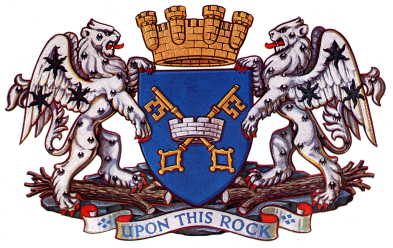 Arms : Azure two Keys in saltire Or enfiled by a Mural Crown Argent; the Shield ensigned with a Mural Crown of six Towers Gold.
Supporters : On either side a Lion Ermine winged Argent charged on the wing with three Estoiles Sable the interior paw resting on a Tree trunk fesswise proper.
Motto: 'UPON THIS ROCK'

The arms were officially granted on 6 September 1960.

Peterborough owes it origin to the foundation circa in AD 655 by Paeda, King of Mercia, of a monastery (from which the present Cathedral has derived) dedicated to the glory of Christ and the honour of St. Peter. The shield shows the keys, symbolic of those to the gates of Heaven given by Christ to St. Peter (Matthew 16 v.19). They are shown enfiled by the mural crown as a differentiation to the simple crossed keys which are the arms recorded for the See of Gloucester. The gold mural crown replacing a Crest above the shield is intended as a civic symbol and this is particularly emphasized by the towers, the whole suggesting the walls of a town.

The city of Peterborough has used the crossed keys already for centuries, but the arms were not officially granted.

The lions are the ermine lions of the Marquess of Exeter, hereditary Lord Paramount of Peterborough, differenced by the wings of the eagle supporters of Mordaunt, first Earl of Peterborough, the estoiles or stars thereon coming from his arms. The tree trunks derive from a device of Earl Fitzwilliam, whose estate forms an important part of the area. The Compartment upon which the supporters stand is composed of rock from its traditional association with Peter (and Paeda) and the motto is similarly derived.

Literature : image and information from the city council.