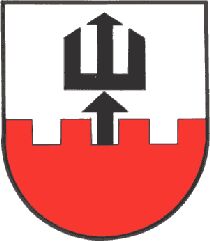 The division line in the arms symbolises the Hörtenberg Castle in the municipality. The local court was held in the castle for many centuries. The oldest known judges, the Lords of Eben, are known from around 1300. The trident is taken from their family arms.