From Heraldry of the World
Your site history : Pischelsdorf in der Steiermark
Jump to navigation Jump to search 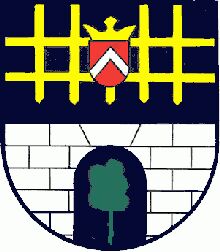 The arms were formally granted in 1911, they were, however, long in use before that. The small escutcheon bears the arms of the Herberstein family, who were lords of the market borough until 1848.

The name derives from Bischofsdorf (the bishop's village), because it belonged to the Archbishop of Salzburg originally.