Pitcairn Island became a British colony in 1838. By the mid-1850s the Pitcairn community was outgrowing the island and its leaders appealed to the British government for assistance. They were offered Norfolk Island and on 3 May 1856, the entire community of 193 people set sail for Norfolk. But after eighteen months on Norfolk, seventeen of the Pitcairners returned to their home island; five years later another twenty-seven did the same.

In 1902 Henderson, Oeno and Ducie islands were annexed by Britain, Henderson on 1 July, Oeno on 10 July and Ducie on 19 December. In 1938 the three islands along with Pitcairn were formally incorporated into a single administrative unit called the "Pitcairn Group of Islands".

Since a population peak of 233 in 1937, the island has been suffering from emigration, primarily to New Zealand, leaving some fifty people living on Pitcairn.

The National Arms of Pitcairn

Pitcairn was founded by the mutineers of the Bounty in 1790. The anchor thus is the anchor of the bounty. The division of the shield represents an island coming from the sea. The bible refers to the religious community. The plough on the top represents the agriculture on this small island (4.6 sq. km).

The crest shows a so-called Pitcairn wheelbarrow, which is widely used on the island, see image below. 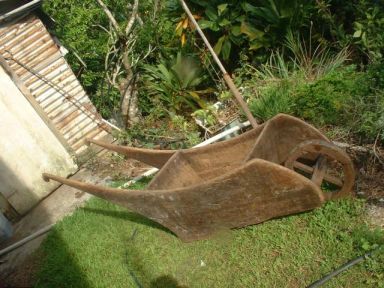