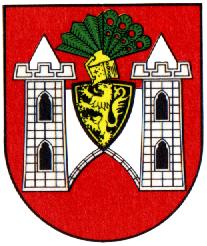 The arms are based on the oldest known seal of the city, dating from 1329. The arms show two towers or a gate, with between the towers the arms of the medieval Lords of Plauen. The oldest use of the lion by the Lords of Plauen is known from a seal of Heinrich I von Plauen from 1288. The family was a branch of the Lords of Weida, who used the same arms (see Gera).

The first time the arms of the city are described dates from 1598. This description only mentions the lion, not the castle. The actual shape of the different elements (with or without towers), as well as the colours, differed widely until 1899 when the current design was formalised by the Ministry of the Interior of Saxony, but with red towers. In 1939 the, still current, arms were officially granted by the German State Archives.