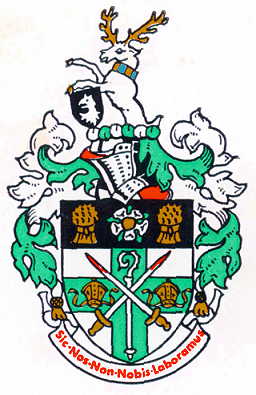 Arms : Argent on a Cross Vert an Abbot's Crosier in pale of the first between two Mitres in fesse Or over all two Swords in saltire proper embrued Gules hilts and pommels Gold on a Chief Sable a Rose of the first barbed and seed proper between two Garbs also Gold.
Crest : On a Wreath of the Colours a demi Stag Argent attired and unguled Or gorged with a Collar compony Gold and Azure and supporting with the sinister foreleg an Escutcheon Sable thereon a Griffin's Head erased of the first.
Motto: 'SIC NOS NON NOBIS LABORAMUS' - Thus we labour, but not for ourselves

The arms were officially granted on February 25, 1958

The main colours, white and green, refer to the waterways and countryside. The green cross represents two ancient British trackways, Garraby Street (York to Bridlington), and the Norton - Londesborough - Brough road which crosses it. On this cross, the abbot's crosier refers to the religious houses which played an important part in the mediaeval history of the district. It is flanked by two golden mitres, one referring to Bishop Paulinus, who is said to have converted King Edwin to Christianity at Goodmanham. The other mitre refers to the Archbishop of York, with which the district has many connections.

The crossed swords with bloodstained points recall one of the most famous battles in English history, when Harold defeated Tostig and King Harold Hardrada at Stamford Bridge in 1066. The black chief, the white rose of York and the golden wheatsheaves are adapted from the East Riding County Council arms, and also provide an incidental reference to the agricultural and horticultural societies of the district. The wheatsheaves are appropriate to a rural district and they also occur in the arms used by Pocklington School.

The crest-wreath and mantling are in the liveries of the arms, green and white. The crest is a tribute to the part played by many well-known local families in the history of the district. They are represented by the holders of the two local earldoms. The white stag of the Earls of Londesborough, with a collar of the gold and blue chequers of the Cliffords, supports a black shield with a white griffin's head taken from the crest of the Earls of Halifax.

The motto contains the (Nos non nobis) of the local Wilberfoss family, from whom descended the famous philanthropist William Wilberforce who was educated at Pocklington School. 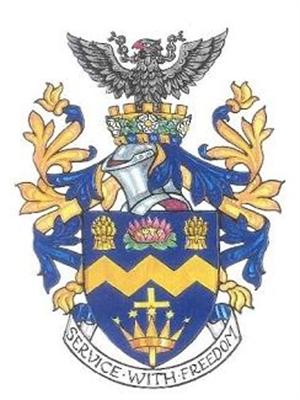 (I have no image of these arms. Any image is welcome !)

Arms : Azure a Fess dancetty of three points or between in chief a Crimson Water-Lily Flower leaved proper between two Garbs and issuant in base a Long Cross enfiling a Celestial Crown Gold.
Crest : On a Wreath Or and Azure within a Mural Crown Or masoned Sable environed of a Garland of Roses Argent barbed seeded and leaved proper three being manifest a demi Eagle displayed Sable holding in the beak Gules a Length of Chain in the form of a Letter W the terminal links fracted Sable.
Motto: 'SERVICE WITH FREEDOM'

The black background, fess dancetty and the two wheatsheaves are derived from the arms of the Dolman family, founders of Pocklington School, which displays their arms in full. The fess is also a feature of, in fact the only bearing in, the shield of the Vavasour family. The wheatsheaves and a water-lily recall the famous lily-ponds at Burnby Hall, and indicate Pocklington as an important agricultural and horticultural centre, and highlight the activities of the floral and agricultural societies in Pocklington. The gold celestial crown and plain cross represent the ecclesiastical role Pocklington has played in the life of the district, its Church, dedicated to All Saints, being known as 'The Cathedral of the Wolds', and has notable historic connexions with Paulinus and the Archbishopric of York. The cross also refers to the cruciform shape of the Church, and to the early advent of Christianity in Pocklington attested by the cross at the west end of the Church commemorating the preaching of Paulinus on this site in the seventh century.

The blue and gold of the crest-wreath and mantling are the livery colours of the Dolmans, the Percys, former Lords of the Manor, and the former East Riding CC. The garland showing three white roses of York, encircling a mural crown, a familiar emblem in local government, represents 'a town in Yorkshire'. The black eagle is that of William Wilberforce, one of Pocklington's most famous scholars, holding in his red beak a length of broken black chain symbolizing his role in the emancipation of the slaves. The eagle is also a reference to the former East Riding and to the former war-time airfield. The chain is disposed in the form of a letter W for Wilberforce.

The motto not only reminds us of Wilberforce's efforts to enable slaves to be freed so as to be able to work for their living in the community, but also of the Council's service to the community achieved through democratic government.