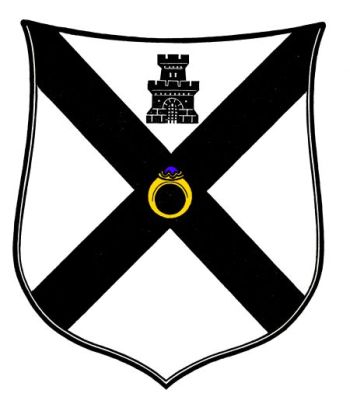 Argent, on a saltire sable an annulet or, stoned azure; in chief a castle of the second.

Pollokshields was established by the Stirling-Maxwell family in 1849 and became a Police Burgh in 1876. The Burgh used a seal in the 1880s.

The seal is an adaptation from the Pollok Coat of Arms, by permission from Sir John Stirling Maxwell, the then representative of the Pollok Family. It is one of the quarters of the Pollok Arms: "Argent, on a saltire sable an annulet or, stoned proper." The annulet or ring was a maternal difference added to the Arms of the Maxwells of Pollok from the House of Eglinton; and the saltire sable is from the Arms of the Maxwells, Earls of Nithsdale. See also Pollokshaws.

An addition was made in the seal by introducing a tower in chief, probably referring to the Castle of Pollok.