Incorporated into : 2019 Bournemouth, Christchurch and Poole 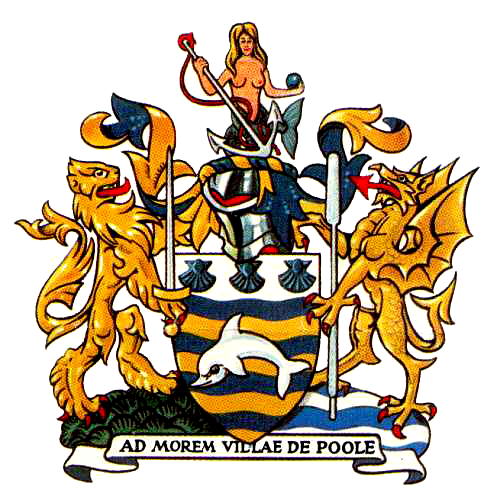 Arms : Barry wavy of eight Sable and Or a Dolphin naiant embowed Argent langued Gules on a Chief wavy of the third three Escallops of the first.
Crest : On a Wreath of the Colours a Mermaid proper supporting with her dexter hand an Anchor cabled without a beam proper and in her sinister hand a Pellet.
Supporters : On the dexter a Lion holding a Sword erect proper and on the sinister a Dragon supporting an Oar Argent upon a Compartment per pale a grassy Mound proper and Water barry wavy Azure and Argent.
Motto: 'AD MOREM VILLAE DE POOLE' - According to the custom of the Town of Poole

In the year 1563 Clarenceux King-at-Arms visited Poole, and confirmed the coat of arms which had been in use prior to that date without apparent authority. This document is preserved in the town's archives and shows the coat of arms in colour. In 1623 there was a Visitation of Dorset by the Heralds and the arms were then drawn again but not in colour. It was only in 1948 that a written description of the arms was confirmed by the College of Arms, clearing up and explaining the many variations in the colouring or tinctures of the blazon in the intervening centuries and authorising the crest, incorporating a mermaid, which had been used without authority for about 200 years.

The wavy bars typified water, the dolphin and lion represent the "the king of fishes" and "the king of beasts" respectively. The dolphin reminds us what the custom was, and still is, i.e. maritime activity. This enterprise was the town's chief source of prosperity from early times down to the middle of the 19th century.

The three escallop shells derive from the emblem of St. James and remind us that St. James is the patron saint of the parish church of the Old Town of Poole. The escallop shell was the badge of the pilgrim and crusader. Its presence on the Poole arms may also have been an allusion to William Longespee, the Lord of the Manor, and a gallant knight, who gave Poole its first charter in 1248 A.D. and who died in Egypt fighting for the Cross in the year 1250.

The pellet (or ogress), coloured black, in the mermaid's left hand may represent a cannon ball and with the cable and anchor call to mind again Poole's maritime past, when the sailing ships were often given Letters of Marque to act as privateers and when no Poole ship ever thought of putting to sea without cannon and shot ready for immediate use. The motto is -"AD MOREM VILLAE DE POOLE" - according to the custom of the Town of Poole.

The lion supporter links with Longespee (see above) and is reinforced by the long sword (or epée) borne on that side. The dragon derives from the Royal Arms on the Great Charter granted to the Town in 1568 by Queen Elizabeth, by which it became a county incorporate (known until local government reorganisation in 1974 as "The Borough and County of the Town of Poole"), thus wresting itself from manorial control. In the royal arms the dragon is coloured red, but this royal prerogative could not be repeated in the Poole arms.

The silver oar completes the allusion to the 1568 Charter as by this the Mayor was made "Admiral of the Port of Poole", a title he still bears as a courtesy title. The silver oar (which was really a mace rather than a rowing implement) is one of the rare items forming part of the civic regalia. The drawing of the mermaid and the dolphin have both been modernised in the new grant of arms; in the case of the dolphin the present representation does recognise that, unlike the times when the grant was first made, these are no longer imaginary beasts to most people, but are known as peaceful, smooth skinned and clever animals. In the older arms the dolphin was shown in its heraldic shape.