From Heraldry of the World
Your site history : Port Elizabeth
Jump to navigation Jump to search 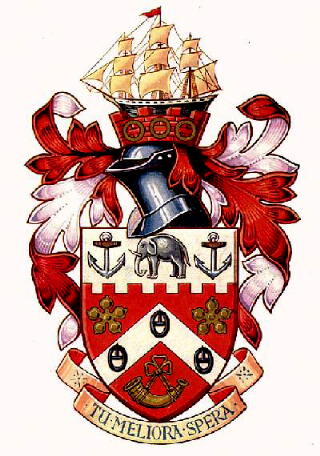 The arms were officially granted on 6 August 1958 and were based on older, unofficial arms used by the city.

The chief differences are that in 1958 the heralds added a pair of anchors for difference and a mural crown. The mural crown not only signifies civic authority, but allows the addition of the arms of Jan van Riebeeck (gules, three annulets or), first Commander of the Dutch settlement in Table Bay, thereby signifying that the arms are South African, see also Cape Town.


In addition, the College of Arms has corrected the wording of the motto. In the corrected wording, "Tu Meliora Spera", the use of the word "tu" (you or thou) is an injunction to seek out better things. Port Elizabeth had previously used the motto with the wording "In meliora spera", which has a rather lackadaisical ring of merely hoping for better things.

The arms are based on those of Sir Rufane Shaw Donkin, Acting Governor of the Cape of Good Hope in 1820-21, who named the town after his late wife and supervised its planning. With the exception of the anchors, which were added as a mark of difference and an allusion to the harbour, the entire shield is taken from Donkin's arms (see below). Whether the Donkin family ever granted permission to use their arms is not known.

The elephant is, rather strangely, an Indian elephant ! The elephant is taken from the arms of Sir Rufane, and were not changed to the local elephant species... Several arms that are based on the arms of the city, however, use an African elephant. The elephant was awarded in recognition of Gen Donkin's services in India, particularly in the Mahratta Campaign of 1817-18.