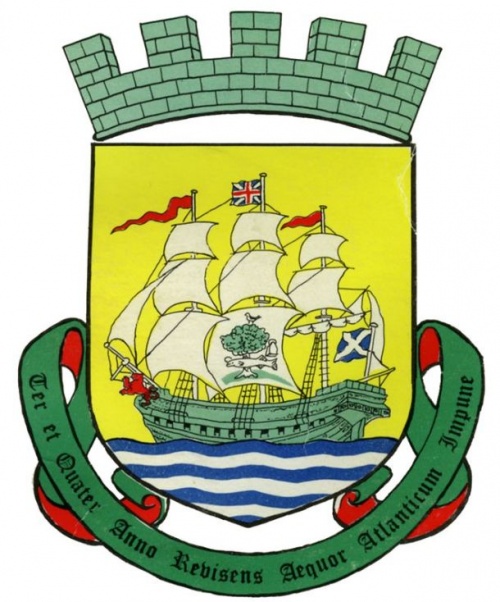 Or, on the waves of the sea a three-masted ship in full sail both Proper, having for figure-head a lion rampant Gules, armed and langued Azure, flying from the foremast and mizzenmast streamers Gules, from the mainmast the Union Jack as borne previous to the Union with Ireland, viz., Azure, a saltire Argent surmounted by a cross Gules fimbriated of the Second, and at the stern the national flag of Scotland, viz.: Azure, a saltire Argent; on the mainsail a representation of the arms of the City of Glasgow, viz.: Argent, on a mount in base Vert, an oak tree Proper, the stem at the base thereof surmounted by a salmon on its back, also Proper, with a signet ring in its mouth Or, on the top of the tree a red-breast, and in the sinister fess-point an ancient hand-bell, both also Proper.
Above the Shield is placed a coronet suitable to a Burgh, and in an Escrol below the Shield this Motto "Ter Et Quater Anno Revisens Aequor Atlanticum Impune".

In 1929 The Lyon King of Arms pointed out that the admiral bearings on the coat of arms had not been registered and that the main sail actually depicted Glasgow as was registered in 1866 and not as granted 1791.
A new Coat of Arms was granted. The main sail of the ship the City of Glasgow's armorial bearings, to the extent to which they were given in 1791 and over the shield a castle like structure to indicate the towns connection with Newark Castle. This representation of the arms the ship having its main sail blazoned with the Arms of Glasgow, a saltire for Scotland, and the union flag of Great Britain.