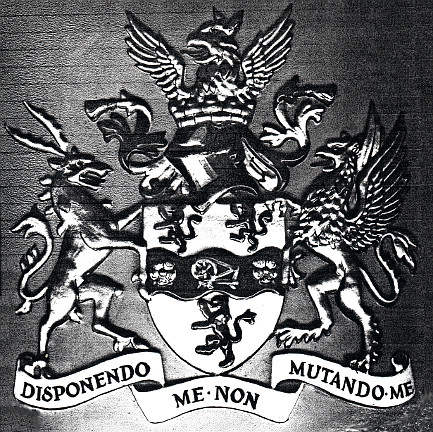 Arms : Argent on a Fesse wavy Azure between three Lions rampant per fesse Gules and of the second a Spinning Wheel Or between two Roses of the first barbed and seeded proper.
Crest : Issuant from a Mural Crown a Griffin's Head between two Wings Or the neck gorged with a Collar Lozengy Gules; Mantled Azure doubled Argent.
Supporters: On the dexter side an Heraldic Antelope Or armed tufted and unguled Argent and on the sinister side a Griffin also Or each gorged with a Collar Lozengy Gules.
Motto: Disponendo me non mutando me

The background of the shield contains the arms of the Obyns family who were associated in the establishment of Portadown in the early 17th century. These have been differenced by the inclusion of a wavy blue fesse to represent the River Bann which runs through the town, and also included is a spinning wheel (denoting the former staple industry of the town) and also two roses which indicate the town's prominent place in modern rose culture. The town has several nurseries, the foremost of which are Messrs, McGredy, whose roses are known the world over.

Formerly, the town had used the arms of the Duke of Manchester, the ground landlord of many holdings in Portadown and district, and who up to recent times had a Castle at nearby Tandragee.

The crest and supporters were retained from the previous design (see image below), but are differenced by the insertion thereon of the three-of-diamonds motif, taken from the Duke's arms. Legend has it that the Estate was once wagered on the turn of a card. Instead of the former ducal crown, a mural crown now appears.

The Duke of Manchester's motto is, by the present Duke's permission, retained, as being considered typical of the spirit of the people of Portadown.