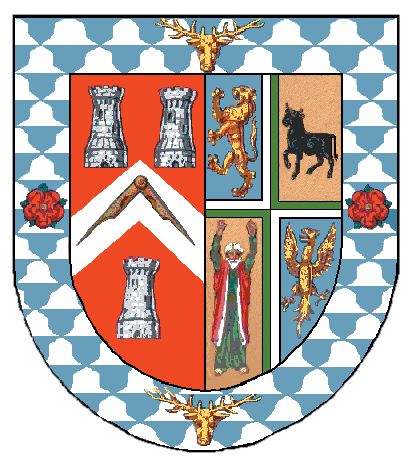 Per pale gules and quarterly azure and Or; dexter on a chevron between three castles argent a pair of compasses extended of the third; sinister a cross quarterly of the fourth and vert between, in the first quarter a lion rampant of the third, in the second an ox passant sable, in the third a man with hands ele­vated proper vested of the fifth the robe crimson lined with ermine, and in the fourth an eagle dis­played also of the third; the whole within a bordure vair charged with two stags' heads caboshed of the third and two roses of the first.

The arms were officially granted on July 20, 1932. The Shield shows the Arms of the United Grand Lodge of England, with a Brodure showing the Red Rose of Lancaster.