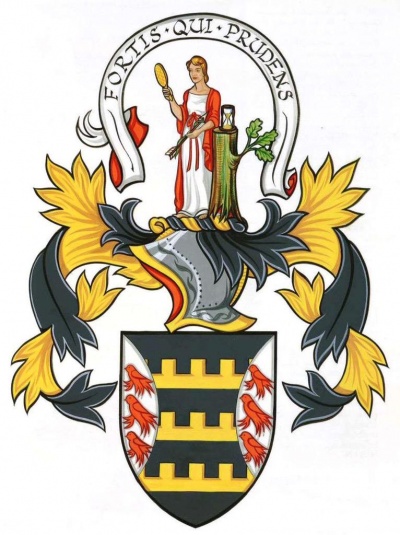 Arms: Sable, three bars embattled Or; two staunches argent each charged with three martlets in pale gules.
Crest: On a wreath of the colours, A female figure proper, vested argent, cloaked and girdled gules, resting the sinister arm on the trunk of a tree eradicated and supporting thereon an hour-glass, and holding in the dexter hand a mirror which she is regarding and in the sinister an arrow entwined by a serpent, all proper.
Motto: Fortis qui prudens

The arms were officially granted on March 18, 1904 in England and on June 25, 1965 in Scotland. The Scottish grant is shown above.

The three golden Bars in the Arms refer to Holborn Bars which adjoins the Head Office and is in fact the Company's postal address. In the old days the term " beyond the Bars " meant Suburbia. The bars at Holborn and the Temple represent the extra mural limits of the City of London's old jurisdiction. Beyond them the rule and protection of the City ceased. Even that limit was a concession. Normally the law stopped at the Walls, in this case at Newgate, and any buildings west were beyond the pale, and were mainly occupied by Non-Freemen.

The martlets or heraldic swallows are taken from the Arms of the ancient Furnival family whose town house was on this site, and known as Furnival's Inn.

The crest is the figure of Prudence, an obvious reference to both the Company's name and the principles for which it stands. The first Chairman of the Company, George Harrison, used this figure in his design of the first seal. He took the figure from the window painted by Sir Joshua Reynolds in New College, Oxford. It has been used as the Company's seal ever since.

The up-rooted oak tree signifies strength, and the hour-glass the passing of time and the need for immediate action for the protection of the future. The arrow stresses the speed with which time passes, whilst the serpent is the sign of eternity. In Roman times it represented the Household god, thus drawing attention to one of the functions of the Company - the protection of the Home.

The motto may be translated as " He is strong that is prudent".