From Heraldry of the World
Your site history : Queanbeyan
Jump to navigation Jump to search 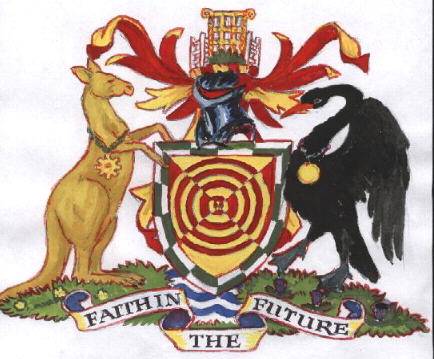 The concentric circles represent a growing city with a growing range of industries. The red symbolises the blood of its citizens, and the gold the wealth resulting from their efforts.
The border, with its brick wall appearance, represents the contribution of all sections of the community to build up their city. Green and white colours signify the ever-fresh ideas and efforts of the people. Queanbeyan stands on the border of the Australian Capital Territory, whose arms include the portcullis, ancient symbol of Parliament.

The white gateway in an Australian country fence alludes to the city's position as gateway to the national capital. It also refers to the early days of exploration, opening up the Monaro plains for settlement, from the base at Queanbeyan.

The supporters are local fauna, with the cog-wheel the symbol of, industry and the bezant the symbol of commerce.