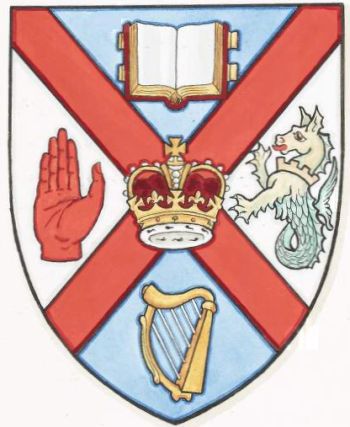 Per saltire azure and argent, on a saltire gules, between in chief an open book and in base a harp both proper, in dexter a hand couped of the third, and in sinister a sea-horse vert gorged with a mural crown of the fourth, an Imperial crown of the last.

The Queen’s University of Ireland was founded in 1845 under the patronage of Queen Victoria, with four colleges for Ireland’s four provinces. Its arms consisted of an imperial crown laid over St Patrick’s Cross, between an open book and an Irish harp. The college for the province of Ulster, Queen’s College, Belfast, used the royal arms quartered with the provincial arms (and an open book laid over the quarters). This unwieldy combination was dispensed with when the college was raised to the status of a university in 1908. Its new arms were modelled on those of the old, national university, but incorporated two new elements to reflect its civic and regional significance: the seahorse of Belfast, and the red hand of Ulster. These arms are used to this day.

The University consists of several institutions, arms below:

Literature: Information and stained glass window image from R. M. McKeag - THE UNIVERSITY'S COATS OF ARMS available for download at university website. Thanks to Z. W. Eisler for providing the information.