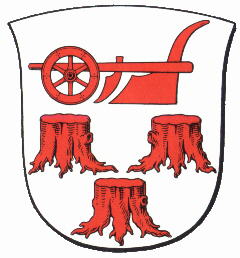 The arms show three tree trunks, for the -rød part of the name, which is derived from the word for clearing the forests. The plough is taken from the seal of the former Frøs hundred and also symbolises the agricultural character of the municipality.