History: Control of the Station passed from the Royal Navy to the Royal Air Force in 1971. The Station was closed in September 1995. 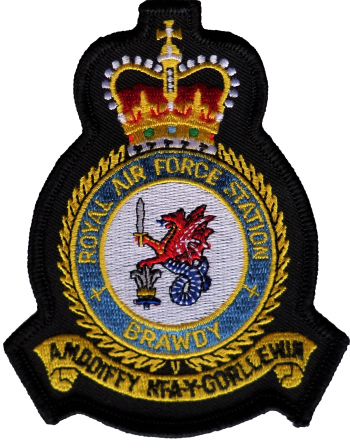 A sea-dragon per bend azure and gules supporting with the sinister claw the badge of the Prince of Wales as Heir Apparent to the Throne and grasping in its dexter claw a sword erect.
Motto: Amddiffy nfa y gorllewin = Stronghold of the west.

Literature: Image from https://www.ebay.com/. Information from Knights of the Sky Part 3 Support Squadron - Teams by B.R. Holliss and R. Symons.