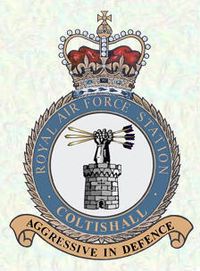 The Tower symbolises the Strenght of Defence of the Station and the Guntlet and Birdbolts signifies the aggressive spirit of the Fighter Aircraft based at the Station. The badge was granted in January 1953. Literature: Image from Pinterest.

© since 1995, Heraldry of the World, Ralf HarteminkInformation from Knights of the Sky Part 3 Support Squadron - Teams by B.R. Holliss and R. Symons.