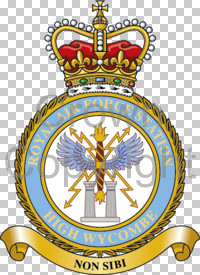 A thunderbolt gules (carged Or winged azure) supported by two light grey pillars.
Motto: Non sibi = Not for ourselves.

The Pillars alludes to the support given to Bomber Command, symbolised by the Thunderbolt. The badge was granted in August 1966.