From Heraldry of the World
Your site history : Radenbeck
Jump to navigation Jump to search 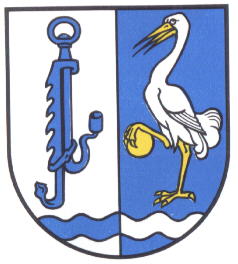 The arms were granted on June 6, 1962.
The so-called farmer's hook in the right half symbolises the agricultural character of the municipality. The crane is a symbol for the Kronsberg area in the municipality, Kronsberg being derived from Kranichberg or crane's mountain. The base shows the Ohre river.