Difference between revisions of "Radkersburg Umgebung"

From Heraldry of the World
Your site history : Radkersburg Umgebung
Jump to navigation Jump to search 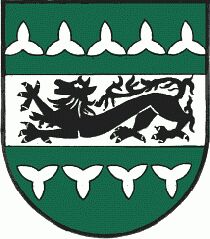 The main charge of the arms is the Styrian panther in the tinctures of the 12th century, black and white (sable and argent). The leaves of arum (gefleckter Aaronstab) symbolise the nine municipalities which were merged in 1969 to form Radkersburg-Umgebung.