From Heraldry of the World
Your site history : Ramberg (Pfalz)
Jump to navigation Jump to search 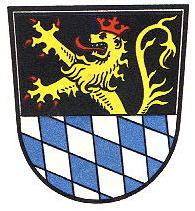 The oldest known seal of the village dates from the 17th (?) century and shows a lion, holding a small shield with a bar. The above arms are based on this seal and show the bar behind the lion. In the late 19th century Hupp presumed that the lion was the lion of the Pfalz and showed the arms as such (image below).
Most likely the lion is taken from the Counts of Scharfeneck-Löwenstein, who used a red lion in silver. The small shield with the bar was the arms of the Lords of Ramberg, who, until 1520 lived in the local castle. 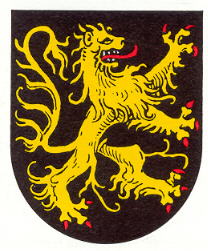