From Heraldry of the World
Your site history : Rastatt
Jump to navigation Jump to search 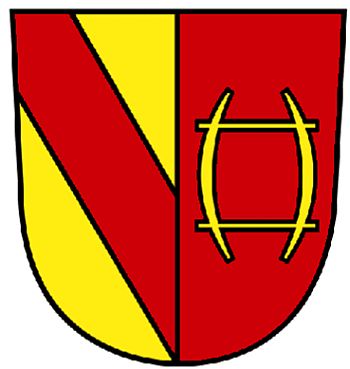 The arms are canting, a Raste is a device used by grape-farmers to carry materials.

The village was founded in the 13th century by the Counts of Calw-Eberstein, became a Markt in 1404 and a city in 1700. The oldest seal of the town dates from the early 16th century and shows a shield parted of the arms of Baden and the Raste as a canting symbol. This combination was used until around 1820 when the Baden part disappeared on the seals.

The arms were officially adopted in 1898, nevertheless were the arms with the combination of Baden and the raste still used until the 1930s. After WWII the 1898 arms remained in use, but in 1995 the city returned to the old combines Baden-raste arms.