From Heraldry of the World
Your site history : Rastatt (kreis)
Jump to navigation Jump to search 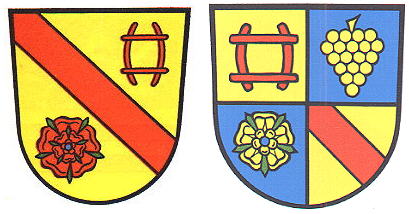 The first arms are a combination of the arms of Baden, with the rose of the Counts of Eberstein and the so-called Raste from the arms of Rastatt. The main part of the district belonged to Baden, whereas 17 municipalities in the northern part belonged for some centuries to the County Eberstein.


After the district reform the arms were changed. The new arms were granted on May 24, 1974.

The arms show again in the first quarter the arms of Rastatt city, in the second the grapes taken from the arms of the former district Bühl, the lower part shows again the rose of Eberstein and the bend of Baden. For heraldic reasons the rose was changed in colour.